So the next house has been vacant for months. Something about a scorpion infestation. The new guy comes in with three elderly people, one of whom is clearly the pastor at his church. It’s been 30 minutes and they’ve been hitting the walls, screaming, and asking that the fire of God consumes the neighbours.

I don’t know why they feel that I have anything to do with the scorpions or that I need this combustion. I’m just wondering what would happen after a few months. The walls can’t take all that many hits I’m sure. And the neighbourhood (by that I mean me) might have to file a complaint. Cos I really expecting Christian neighbours to be, you know, Christian.

All these for heaven. These neighbours are from hell!

So a mosquito landed on my face, took off, and landed again. Leaving me to slap myself twice in quick succession. It didn’t afford me the pleasure of swapping it, smearing it’s insides with satisfaction. Like that bloody mosquito those years ago.

Right now I’m angry with the world. It’s 2:58am and I can no longer sleep. I’ve been thinking up ways to get even. I no longer want to just kill this guy, I want to teach it a lesson. So I’m here, waiting, looking into the darkness for it. African mosquitoes are advanced you see. If you turn on the lights they just go through a wormhole and reappear in another space and time. I have to be as patient as the Amazon natives, as fast as the Masai, with wisdom of the Donga.

I know it’s only a mosquito but nothing in this world has made me slap myself, not once but twice.

Been out and about

Been in and out

Been waiting, been watching, been hoping.

Been a while I’ve been here.

There are many, unfortunately little known, remarkable people amongst us. People who have taken upon themselves the quest to better our world. I stumbled on another last week while going through some comments of Facebook. I had to make contact and we subsequently arranged a meeting.
A long read but worth every line.
Hello, Ejikeme. Tell us a little about you and how you got started as an inventor.

I was born and named Ejikeme Nwosu on 4th February, 1983 to my parents, Chief Christopher Nwosu and Mrs. Mary Nwosu. I was the seventh child of family of eight children. Right from my kindergarten days, I found it much easier to understand and learn things compared to my peers. Apart from that, I loved asking questions and always wanted to know how things happen. I remember vividly one night as I was trekking with my elder brother on the street of Awka, Anambra state, and there was darkness everywhere as the electricity supply was lost but I noticed that cars on the road still have their lights on. I asked him, ‘Obii, why is it that NEPA has taken our light without taking the ones used by the cars?’. I can’t remember his responses then but I am pretty sure that I wasn’t satisfied with whatever he told me. I was in kindergarten then. The questions remained in me until at a point I got to know that cars are not powered by the national electricity grid, since the electricity supply of cars are more reliable, we can duplicate such in our homes, estates etc.

I loved reading lives of great scientists and philosophers, in fact I so much admired the way they do things like being non materialistic and keeping beards. Laughs.

My secondary school Chemistry teacher, Mr. Umeh, was god-like in his ways of teaching us Chemistry. His inspiration was so much that I started conducting little experiments at home using equipments I fabricated.

As an undergraduate I joined American Chemical Society and received weekly publications of Chemical and Engineering News and other Chemistry Journals. Joining this Society made me understand that I need more than passing exams to become a great Scientist. This new way of thought made me to run independent researches and publish research works as an undergraduate.

I am no scientist but I can deduce that that was the longest ‘little about yourself’ ever.

You coined the name Gason, given to a different state of water you discovered. How has the acceptance been?

Yes, I coined the name GASON as a new state of water. I did series of studies to arrive at conviction that water vapour from hot water and ice are different. It sounds crazy, but my guts never failed me.. I had challenges getting the research article published, but I later published it in a Journal recommended by one of my Lecturers. I was eager to get the work published then, but now I realize that I have to do more works on the Theory and get the work published in a more influential Journal or at least attend high impact scientific conferences to discuss this theory. But I am sure that the world and entire scientific community will celebrate the work someday, of course after some initial ridicule.

I would love Inventors to think of the usefulness of what they want to invent. Inventors should focus on inventing what makes life better and earth safer.

Inventors should avoid plagiarism and give due recognitions to whoever is due. 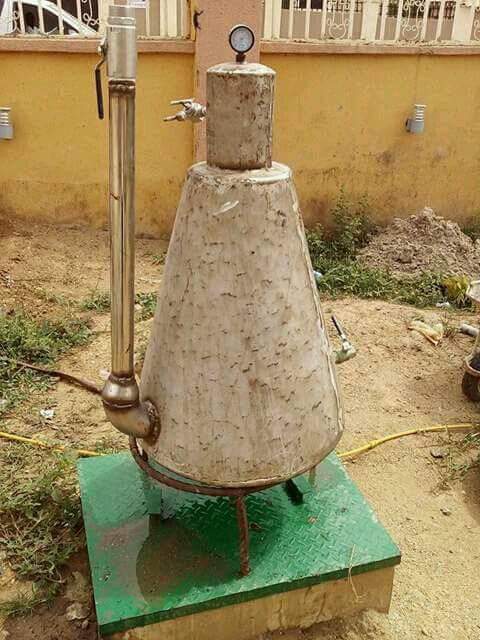 Business financing hasn’t been easy, because I finance both the Research and Business aspect. Although we are working on bringing in partners. We need governments support especially in the areas of advocacy, our people need to be told that their wastes can be used to generate electricity for them and more. We did series of presentations with the federal government via the Ministries but no serious commitment so far has come from the FG. But we are re strategizing on way forward.

What secrets have you learned in terms of marketing your product and getting it into stores?


As a young man above 30 years, you mind giving me a rough amount of megawatts I have peed off in my lifetime?

Going back to your business’s beginnings, what process did you follow to develop a prototype?

We have been able to fabricate a pilot plant that converts urine into energy, the functioning is very okay. We are trying to secure some deals from different organizations to install these facilities for them.

And has the government been in any way involved in your work?

NO.
I don’t even know why I asked that question.

What licensing deals are in place?

We have been able to secure an invention patent right for this technology.
Cool..

What has been your greatest success so far?

I can say that the greatest success so far is the construction of a functional plant to uses this technology. We are just sowing now, I hope that we will reap bountifully soon.

…and your lowest point?

Lowest point was when we were trying to secure a deal from a very big facility in the country, we were still doing checks to know what could be the cost of the project, someone asked that I should bribe him out rightly based on what he anticipated could br the project cost. I told I am no longer interested. Yes, we all need money but our love for excellence and patriotism must rise above our love for money.
I love that last line. You probably should have it as your company slogan. It would be the longest slogan ever but hey, you have a knack for long lines. 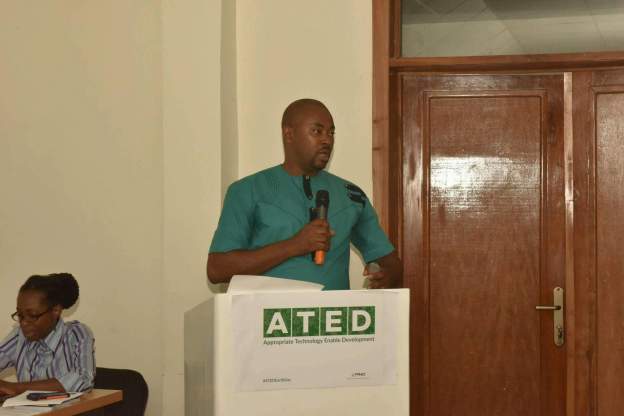 Lastly, what advice would you offer other inventors developing products?

In ancient Rome there was a time when the people were often faced with pirates terrorizing trade places every now and then.

So Cicero was given the mandate to eradicate this menace. A responsibility that gave him alot of power.

I’m just wondering why all that was necessary given how slow those ships must have been with oars and masts. Heck, the Ships had  cruise speed probably about 5-6 knots and with 15-16 hours traveling they made the 100 nm a day (the all-time top was 130 for a week, only achieved a few times in times of Augustus). Quora.com

Ships left Europe for Africa during the Bronze age, they didn’t get to Africa till the Iron age. Thats how slow the ships were. lol

How the hell didn’t the people see the pirates coming from a long way off with enough time to pack up and leave before anything remotely terrorising could happen?

First the United States (acting on intelligence gathered) have placed a restriction on devices bigger than a cellphone for wouldbe in-flight passengers. Now the United kingdom has followed suit.

The snitch probably forwarded the memo to MI6. Or the guys in the UK just thought to copy the US.

I wonder how much intelligence intelligence agencies have anyway. If you announce to me, days ahead, that the bomb I hid in my iPad or laptop won’t be allowed in the cabin with me, or my matyr friend, but will be stashed away in the hub, can’t I, a renowned terrorist bomb-maker guy, with tools in hand and being a graduate of time consciousness, make a one button pressed, bomb-signaling thing to activate my other devices in the hub?

How dare they belittle me? And why can’t I simply fly to a country not on that list to fly from?

Hungary still insists on detaining migrants passing through the country cramming them in air-conditioned shipping containers arranged in a barbed wired enclosure.

The migrants though are really upset and have been protesting. Then someone thought of the smart idea of a hunger strike.

I wonder how it was for some with mobile phones who went on social media at the time  with the post “Hunger strike still on” and somebody comments “where?”

What the hell is wrong with a container with bathroom facility, air-conditioning? Isn’t that more comfort than they’re used to? Or for some, what they’re expecting in the promised land?

So a pastor of a small time church (I think it’s small time cos how else will Pastor get all the free time to go diamond mining?) oh am I wrong? He didn’t actually find it, his Labourers  did? Oh OK. My bad.

Where was I? Oh yeah, in Sierra Leone a pastor found (his Labourers actually) one of the biggest diamonds in the world! Some 700 karat stone!

It’s locked away in the central bank at the moment, cooling off. Pastor too, not in the bank, his home, going through maps and resort brochures.

What’s this all about?
I’m just wondering if he’ll remain a pastor. 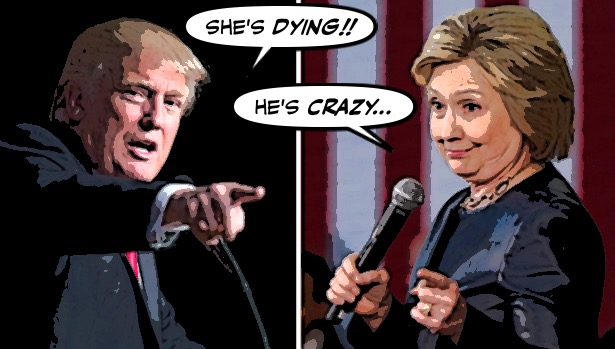 Now we the people of the rest of the world wait to see the general thoughts of the viewing public in America. And of course we still wonder how Bernie Sanders fell out. Anyway, it’s out of our hands. You know how film critiques get? Do they ever affect the ratings though?

Why is the person to give you a massage not called a massager?
Why is the guy from the post office not a post officer?
Why is a freezer in the refrigerator? If the freezer freezes, the fridge fridges?
Why is a surgical operation different from a sting operation? Aren’t they both operations? Why is it called a sting operation when there’s no stinging?
Why is refuse and refuse not the same thing?
Why is English unnecessarily complex ?
Why is the letter C unbelievably useless?